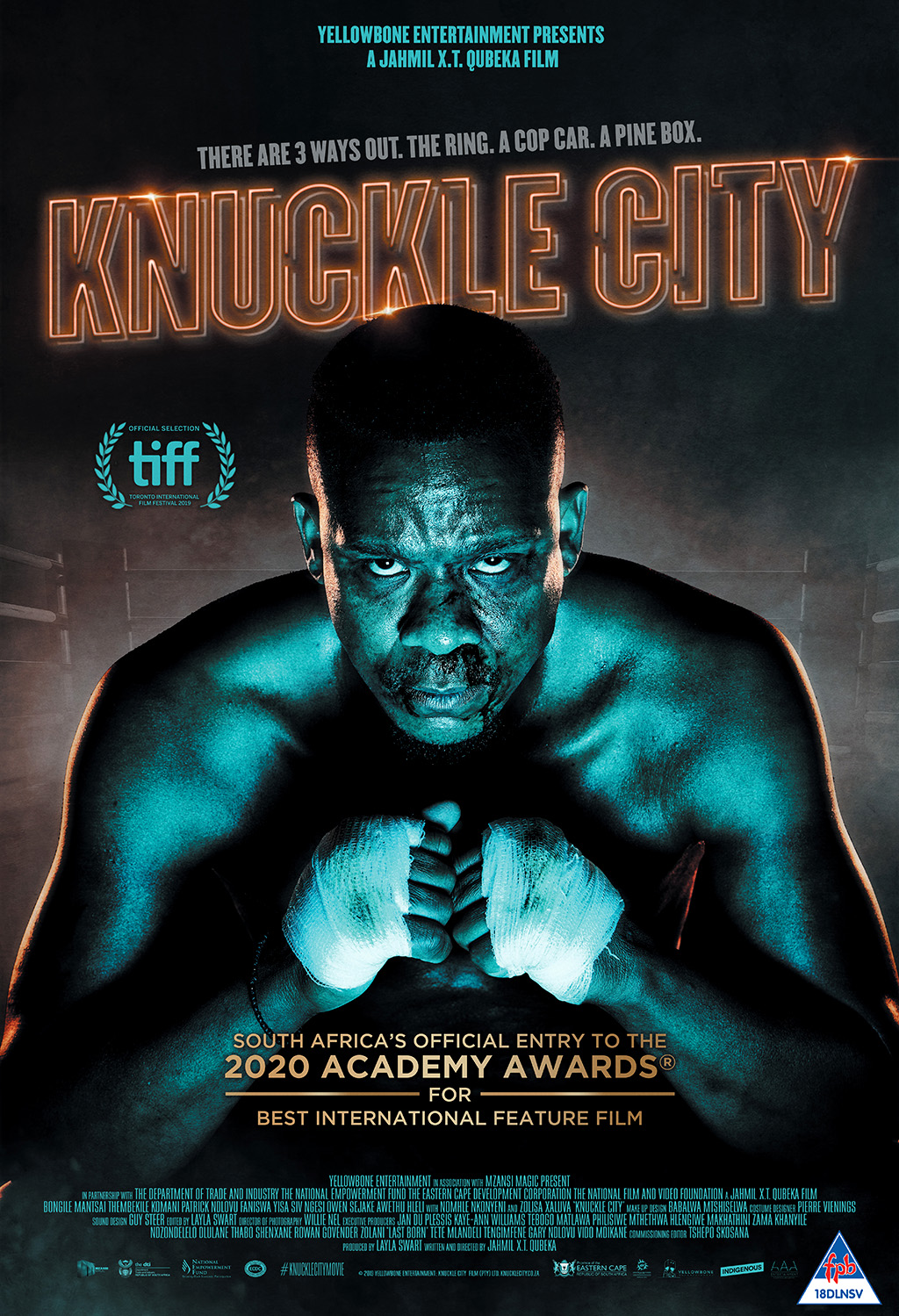 ‘Knuckle City’, the new movie by Jahmil X.T. Qubeka, has been chosen as South Africa’s official Oscar submission for the 92nd Academy Awards. The announcement was made by Makhosazana Khanyile, CEO of the National Film & Video Foundation (NFVF).

The gritty crime-drama film tells the story of an aging, womanising, professional boxer from the Eastern Cape and his career-criminal brother who take one last shot at success and get more than they’ve bargained for.

The news of the film’s selection comes shortly after its world premiere in the Contemporary World Cinema programme at the prestigious Toronto International film Festival (TIFF) on Saturday, 7 September, where it screened to much international acclaim. No stranger to TIFF, Qubeka’s ‘Sew the Winter to My Skin’ played in Toronto last year, and ‘Of Good Report’ screened in 2013.

The film was the opener of the 40th Durban International Film Festival (DIFF) in July and received a standing ovation from the audience at the end. Bongile Mantsai won best actor at DIFF for his role as the boxer. ‘Knuckle City’ also stars Thembekile Komani, Siv Ngesi, Faniswa Yisa, Awethu Hleli, Nomhle Nkonyeni, Zolisa Xaluva, Owen Sejake and Angela Sithole.

The first public screening of the film was hosted at @Movies Hemingways in East London on 20 August, where it was packed to the rafters, as part of the producers’ commitment to ‘take the film to the people that it’s all about’.

Set in the rural Eastern Cape town of Mdantsane, known as the boxing mecca of Mzansi, Qubeka’s film follows the anarchical descent of the two brothers into a hellish life as they are driven to the brink by an all-too-familiar toxic masculinity that breaks them down.

The sleepy township of Mdantsane is vast and poor, and yet it has produced some of the country’s – and the world’s – greatest boxing champions. For young men and, increasingly, young women, boxing is the only way out of poverty.

“What struck me most about this township, which is where I grew up, is that it has produced 17 boxing world champions since 1994 – both men and women in different divisions,” said Qubeka in Toronto at the Q&A following a screening on 7 September. “The kids grow up seeing these champs driving around town in their fancy cars. But many also fall from grace and land up right back where they came from. I wanted to explore why and how this happens.”

Qubeka points to boxing champion Manelisi “Leli” Mbilase, who in 2018 was stoned to death by mostly female community members in Mdantsane after he was allegedly caught robbing two women of their belongings. The former SA featherweight title holder quit boxing in 2009 and became involved in crime with a group of gangsters who terrorised the community. It was reported that he had succumbed to a life of drugs and would do anything to get a fix.

“Boxers are left to fend for themselves after their fighting days are over and many become misfits,” says Qubeka. They often live with pain and so became addicts, and a burden to society. Given that boxing is a sport that requires extreme discipline, I wanted to delve into the reasons why so many of these talented fighters become a mess, wreaking havoc at home and destroying their families in the process.”

In his TIFF 2019 review of Knuckle City, on TheFilmStage.com, Jared Mobarak writes, “Knuckle City doesn’t seek to forgive these men and their deplorable actions, but instead contextualises where that ingrained misogyny, toxicity, and violence comes from. This is an eye for an eye environment one must steel him/herself to early in order to survive.” He adds, “Qubeka injects enough sensitivity and introspection to ensure he’s merely keeping reality intact—not condoning it.”

“We are exceptionally proud of this achievement,” says well-known producer Layla Swart, who co-owns production company Yellowbone Entertainment with Qubeka. “It’s a harrowing tale of a man lost, who tries to look after his family even as he is trapped in the seedy world of underground boxing. The film packs an emotional punch as hefty as any of the gruesome on-screen ones as it explores greedy commercial exploitation, poverty, violence, race, and what it means to be a man.”

‘Knuckle City’ is distributed in South Africa by Indigenous Film Distribution (IFD). “This director is known for investigating the dark night of the soul. We are excited to bring this exceptional South African film to the big screen.” Said Helen Kuun of IFD.

International sales for ‘Knuckle City’ is being handled by AAA Entertainment.

‘Knuckle City’ was produced by Yellowbone Entertainment for Mzansi Magic Movies. It was funded by the Department of Trade and Industry (DTI), the National Empowerment (NEF), the Eastern Cape Development Corporation and the National Film and Video Foundation (NFVF) with the support of the Buffalo City Municipality and the Eastern Cape Provincial Government.

‘Knuckle City’ opens in cinema in South Africa on 27 December 2019.