The Tribe
In Cinemas: 17 March 2017
Directed by: Charlie Vundla 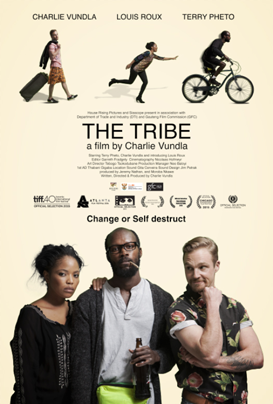 Smanga is a celebrated, young, professor at a prominent South African university whose life quickly unravels when his wife, Laura, leaves him. He spirals into an alcohol, marijuana and sex induced tail spin that places the status of both his career and house in jeopardy.

Smanga’s path of self destruction is interrupted when he meets an old school mate, Jon, who is a failed motivational speaker. Taking pity on him, Smanga invites Jon back to his place and a friendship quickly develops. Through their emotionally honest communication Smanga begins the process of healing himself.

Having arrested his mental and physical decline, Jon convinces Smanga
that he must get on with his life: priority number one being saving his house, for which he has received a “final notice” on his bond repayments. Jon sees an opportunity to boost his friend’s income by dealing the marijuana that Smanga grows in his backyard.

Smanga’s wife abruptly returns after being battered by another man. Laura moves back into the house and these three misfits begin a unique living experiment. However, things become complicated by an unexpected pregnancy.

As the tension in the house rises a newly clean Smanga faces a complex decision that will define the lives of his tribe.